A World of Imagination and Collective Memory 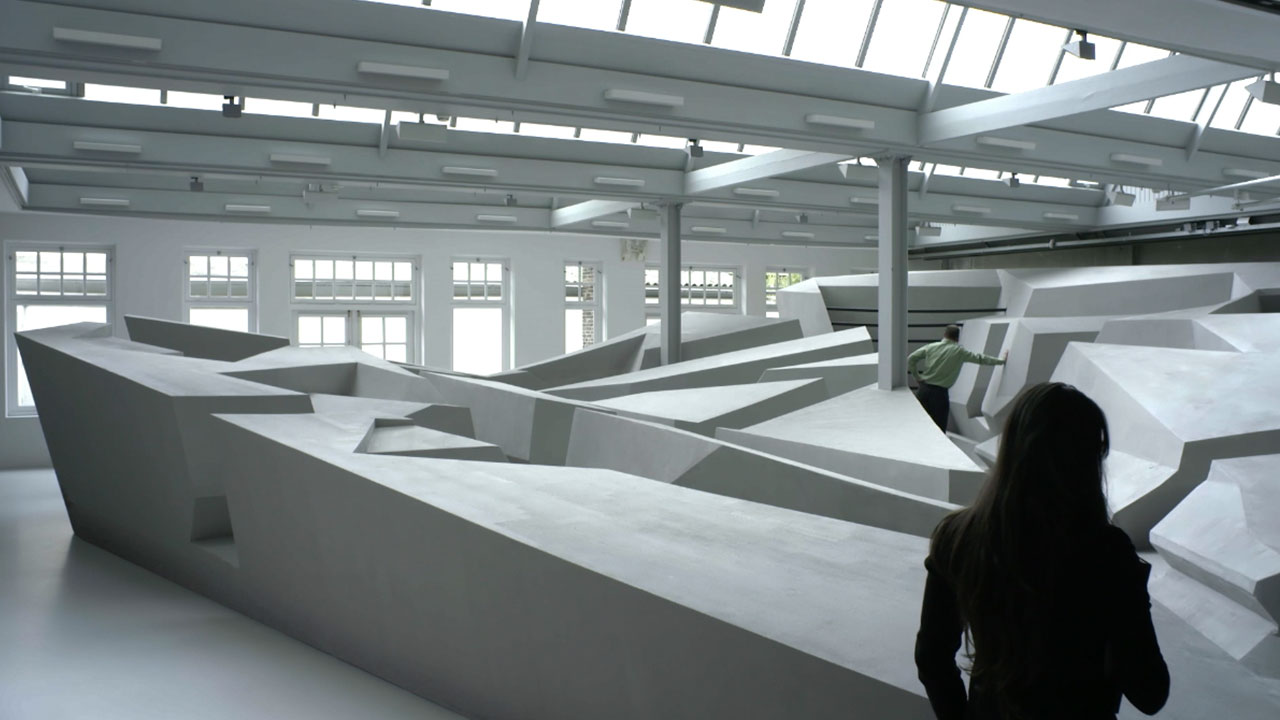 The End of Sitting 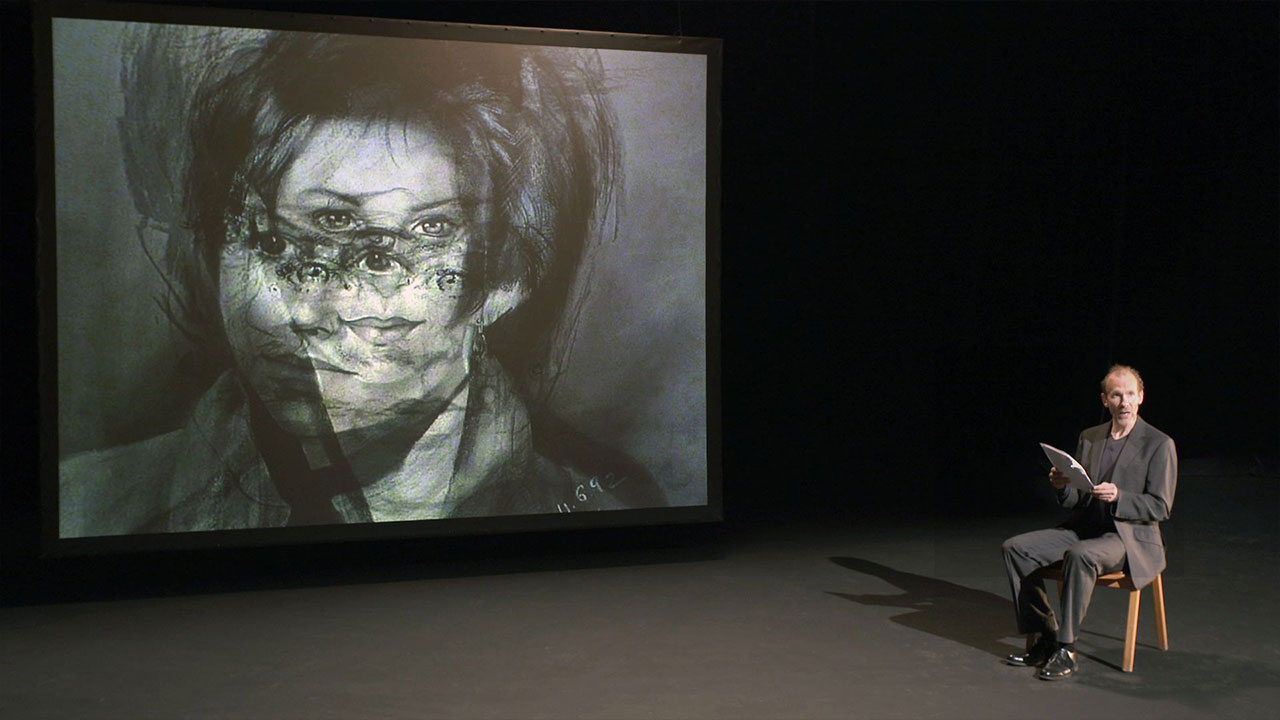 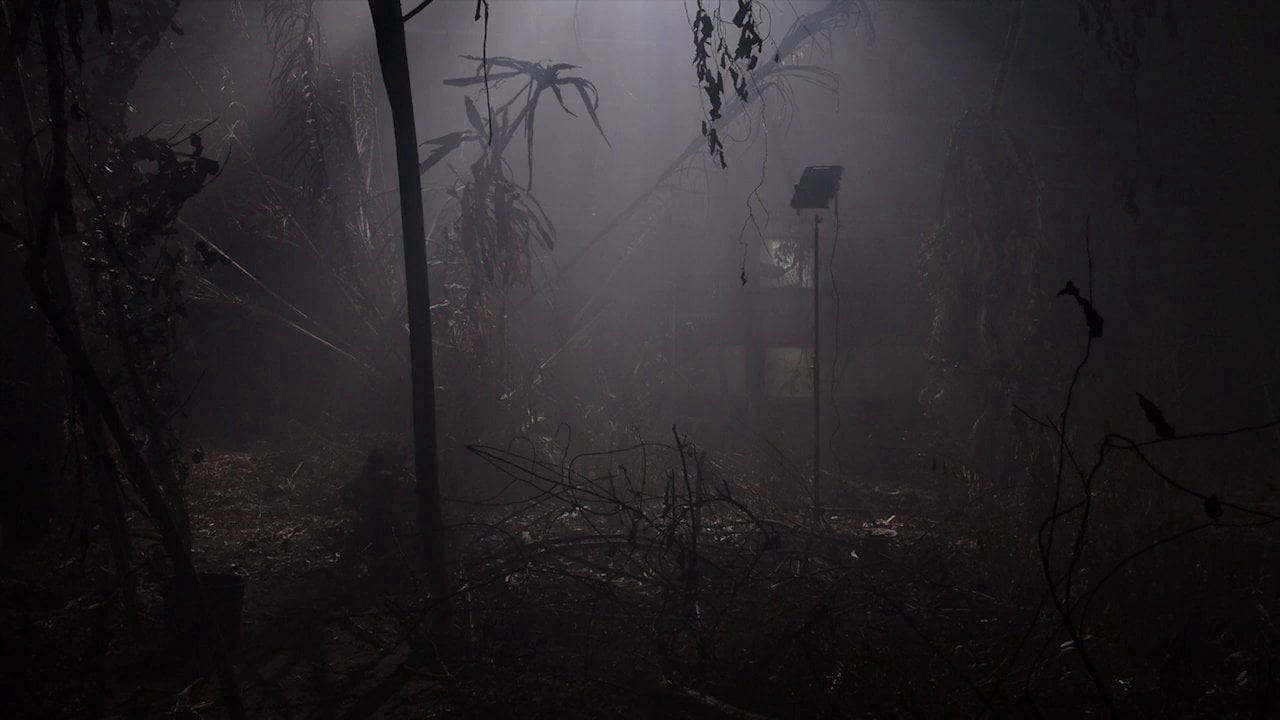 We came across the work of Barbara Visser while preparing for the 2013 Imagine Science Film Festival, whose theme was DATA. Her eerie, beautiful film Herbarium, which became part of our closing night program that year, responds to data in a unique, eerie way: here, dead plants live again, suggesting what may be left out of raw numbers and genetic information. Since then, we've followed her latest scientific film investigations and her role as Artistic Director of the prestigious International Documentary Filmfestival Amsterdam (IDFA). In preparing this Spotlight, she answered a few of our questions about her work.

- Nate Dorr, Director of Programming, Imagine Science Films
What are the inspirations for these three particular conceptual pieces?
The making of Herbarium started with an invitation from an organization called Beelden op de Berg, who make a sculpture exhibition at irregular intervals since 1976 around an arboretum in Wageningen, The Netherlands. My point of departure was the idea that an arboretum is an exhibition of plants to be studied, and the somewhat sad notion that this type of display seems to have lost its relevance, as new and more precise techniques have emerged into the world of taxonomy. The important aspects, although non-scientific, are the physical, the visual, the three-dimensional, the scent, tactile properties of plants. How can these be so easily removed from the equation? I’ve filmed in a greenhouse that was closed years ago, as a result of these developments, and looked at the dried remains of exotic palms and ferns and visualised these with the dedicated concentration we see in the type of films that today would probably be called plant-porn, such as vignette movie The Secret Life of Plants. Film and photography can blow life into lifeless objects, even if the attempt is shown, by seeing the puppet-master at work. 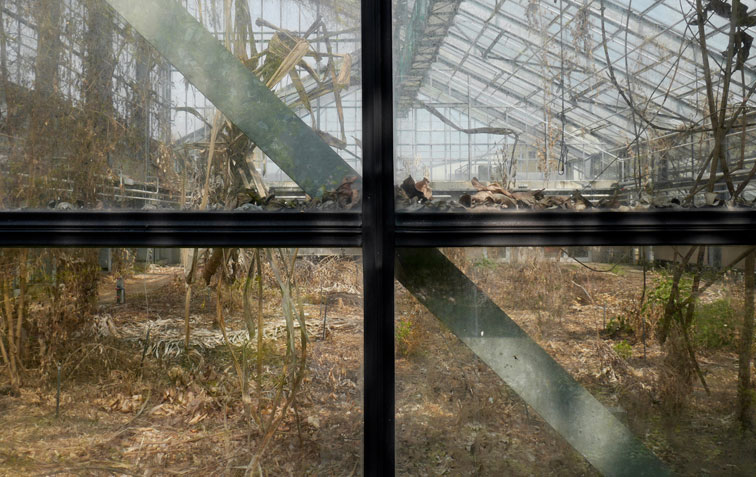 Herbarium (2013)
Manual/2 came about when I was invited to make a self-portrait for a solo exhibition in a small art space in London. I first assembled a collection of older video works I’d made. In my early career, as is often the case with young artists, I was interested in identity and representation of the self, in relation to convention, human behaviour and cultural codes. Among these works, one of which was the piece I consider to be a pivotal moment in my oeuvre, is “Gimines”, the guest appearance I have made in a Lithuanian soap series of that name in 1995. Invisible to the viewers in Lithuania as being conceptual art, the short cameo as “Barbora”, a Dutch artist visiting Lithuania to make a work, was a combination of being anti-artistic, site-specific and reflective without becoming overly intellectual.
These works, projected onto a large screen, have a ‘live’ voiceover by an actor who recites parts from my client file that the Psychoanalytical Institute of Amsterdam, The Netherlands had compiled over the years. These fragments are connected by pieces of prose written for the occasion, as I felt the cold observations needed embedding in a text reflecting the world of imagination, which is also my world, maybe even more than what the therapist makes of it.
Manual/2 is originally conceived as an installation with a projection in a black room. 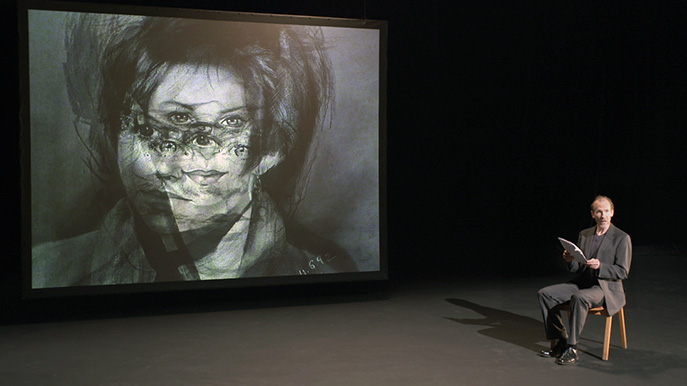 ​
Manual/2: The Patient Artist (2015)
The End of Sitting is a collaborative project with RAAAF (Rietveld Art, Architecture and Affordances). Initially we were invited to create a vision for the future workplace of the Dutch civil servant, by the Chief Architect of the Dutch government. The research quickly led us to review current insights on physical health or lack thereof during a seated day at the office, and also to the solutions that are offered so far, which always take table and chair as the point of departure, and never ever seem to care about the role of aesthetics in the workplace. In the first version of the installation, scientific experiments were done, and two expert-meetings took place, with people from various walks of life. I was first part of the development and design stage and finished the process with this short film.
The audio of these expert-meetings was used for the soundtrack of the film. I have invited mime-actors who had not visited the installation before, to enter and discover the possibilities. 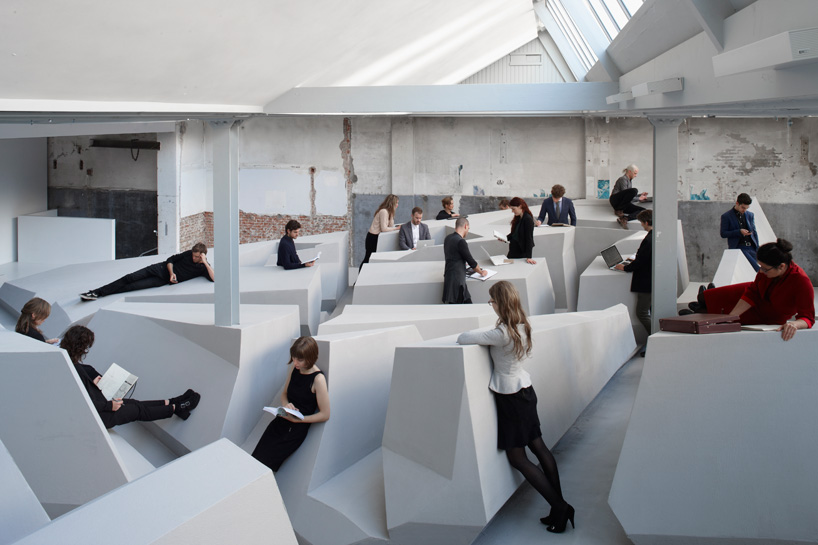 The End of Sitting (2015)
How do you decide on a form for each film?
Every work is started with an open mind, at a point as close to zero as possible. Although I draw from the experience I’ve built up, I avoid developing standards, formats or templates. If I’m not curious about the outcome, I lose interest quickly. So every project is a research project – what a cliché! – hence I do force myself to work towards a result, not hide behind the charm of the unfinished, and the promise of the word process. And to be able to say it is finished and start anew.
How would you define a "science film"?
One of the reasons I love documentary in general is that, apart from being entertained and/or moved, one often learns something about the world, human nature, about cultural or political issues. In that sense, every good film is a science film to me. But in reality the term seems somewhat limited to films about what scientists do, and explain what their specific research is about. That is exciting enough in itself, I think, as scientists are on a great and difficult adventure, and modestly dedicate their life to a building block for future discoveries.
How has your work at IDFA changed or broadened your thinking on documentary film?
Being IDFA’s artistic director this year has made me  – more than ever – aware of the importance of imagination: the point of view of the filmmaker and the notion that to document reality is to change reality. A story is just as much the story of the filmmaker as it is of the subject, and so it should be. Furthermore, the visual language should never be valued as secondary. 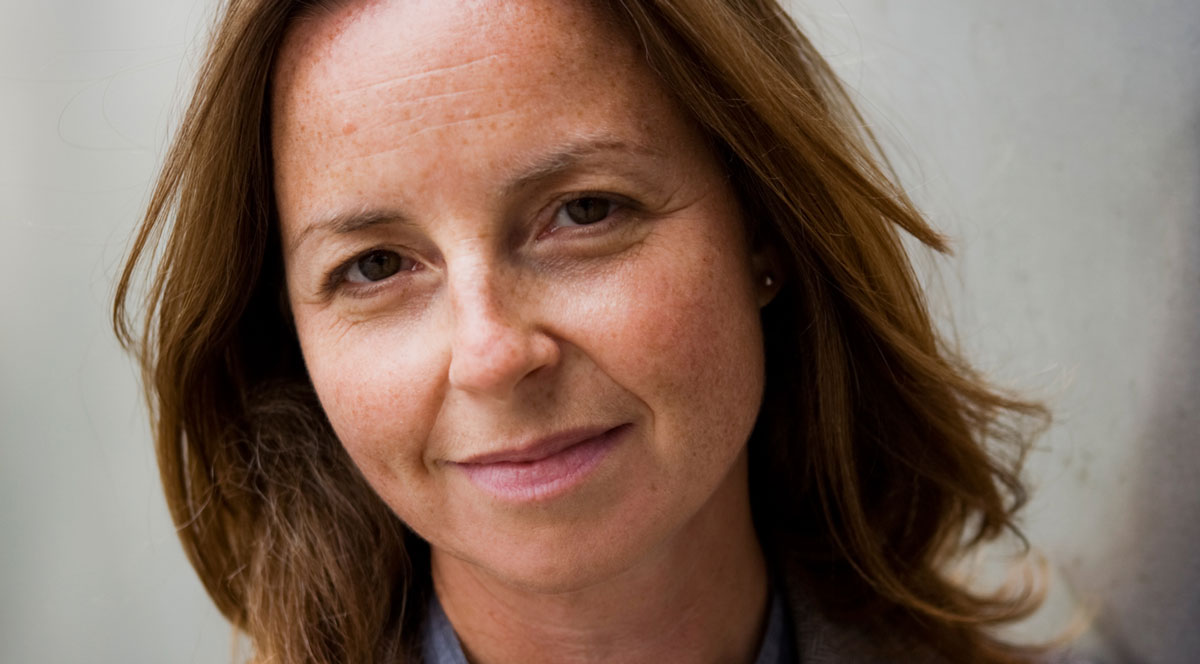 Barbara Visser studied photography and audiovisual arts at the Gerrit Rietveld Academie in Amsterdam, the Cooper Union in New York and the Jan van Eyck Academie in Maastricht. From 1992 onwards her work is shown internationally.

Her work focuses on the perception of existing narratives. Using photography, film, text and performance, the work addresses the uncertain relationship between registration and dramatization, and plays with the notions of authentic and constructed realities.  The ambiguousness of photographic and images in the media, as well as modes of perception are often addressed by the works.  By challenging the codes of storytelling and what these do to our memory and belief systems, Visser provokes another look at what we perceive to be ‘normal’.

Visser often collaborates with other creative practices, and is currently the chair of the Royal Netherlands Society for the Arts.

Visser has participated in the Bienal de Sao Paulo, Brazil (2006), Manifesta, Trento, Italy (2008), Architecture Biennale, Dutch Pavillion, Venice, Italy (2010), Art Biennale, Dutch Pavillion group show (2011). In 2011 and 12 she’s written and directed the film C.K. (2012). Awards for her work include the Dutch Cultural Media Fund Documentary Award (2010), the dr. A. H. Heineken Award for art and science (2008) , David Roell Prize 2007 from the Prins Bernhard Foundation (2007). Since 2014 she is appointed as a member of the Royal Dutch Academy of Arts. Barbara Visser is represented by Annet Gelink Gallery in Amsterdam.